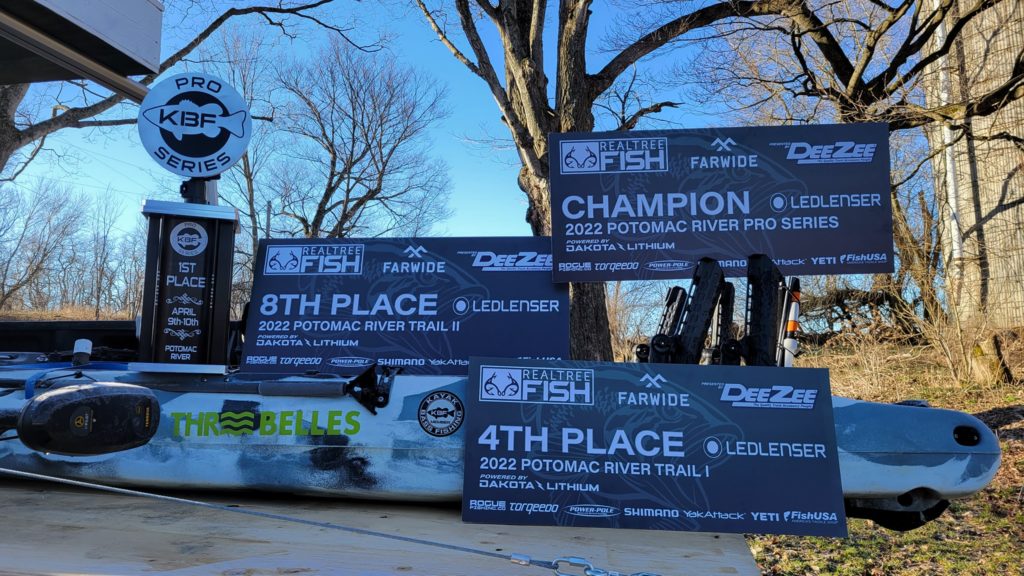 April is an exciting time for northeast anglers.  The snow is starting to melt, the water is warming, and tournaments are kicking off across the region.  For many anglers this is the first opportunity to get back on the water and catch fish.  However, for the few like Tyler Sweet who are willing to travel, the tournament season has been in swing for a few months now.  For everyone else, the Potomac River event from Kayak Bass Fishing is the start to their big tournament season.

Tyler, a member of the Three Belles Outfitters National Fishing Team and New York resident, took off for the Potomac in the hopes of getting on fish of substantial size.  What he didn’t know is that he would be coming home with hardware and a huge smile on his face.

Tyler recounts his first day of tournament fishing with a 5:30 AM launch on Saturday with a trip of over 2.5 miles to get to his spot.

“As I slowed down and approached the flat, I reached back to grab my first rod for the day. For some reason, rather than grabbing my FX Custom Rods Medium cranking rod which had the lipless on it, I grabbed the Medium Heavy cranking instead. I had rigged that rod up with a Strike King KVD 2.5 Squarebill. My mind was thinking one thing, big bait for big fish. Which honestly isn’t my usual style. My confidence bait is usually a ned rig, that’s not exactly big bait power fishing.

The choice was the right one though. I eased my way into the flat, probing the bottom with that 2.5. I was moving it slowly, feeling the bottom as I went, looking for the patches of grass. I started dragging it more like a football jig. When I felt the grass, I would give it a pop off it and pause. The slow rise of the bait triggered the bite. It took 20 minutes, and I was on the board, and bonus, it was a good fish. She measured 18.25-inches. I was thrilled. I didn’t know how many fish would be here, or what the quality would be. I only there was green grass. This was a great start. It was 6:34.”

Tyler continued to keep hammering the fish until 11:00 AM where he had a 5 fish limit of 88-inches.  He made the tough choice to leave his spot in hopes of being able to come back on Sunday for a repeat performance.  The remainder of his day was slow with only one fish that wouldn’t cull.  The bag secured him 4th place for the days tournament and put him in first for the pro-series event heading into Sunday.

Sunday’s conditions took a change for the worse.  Winds up to 20 mph sustained and gusts over 30 were predicted by 9 AM.  This left Tyler with only a few short hours to make something happen before conditions would become potentially dangerous.  The goal was 85 inches by 9 AM and then start to watch the conditions.

Tyler started off at 5:30 and soon realized that he was witnessing a blowout tide.  This would completely change the way his spot would fish, and he needed to adapt.  By 9:30 he had a limit with a few culls for a total of 82.50 inches.  The wind picked up and conditions became dangerous.  Tyler made the tough decision to end his day and get off the water with several hours left to go in the tournament.  A judgement call that would make for a stressful afternoon.  He was in first place for the Pro-Series, but uncertain if that would hold up.

Day two concluded at 2:00 PM and Tyler made his way to the awards ceremony where he was named as the Pro Series Champion.

“The drive home was long, but this was a good long. With the Pro Series trophy beside me, and my phone blowing up with calls and messages from all sorts of people congratulating me, I had a grin on my face the whole way back. It was a grin I knew would last a while, and it felt amazing.

This is my fifth year tournament fishing. I have learned so many things over the past few years. I have met so many amazing people. I have had small wins, some near misses, and some heartbreaking losses. But this was by far my biggest win. I found the right fish, made the right decisions, took some risks, and gave it everything I had. When it’s your time, things just go right. That weekend on the Potomac I guess it was just my time. The 2022 season is off to a hell of a start, and I am truly grateful for all those that helped me get here and the support I’ve had.”